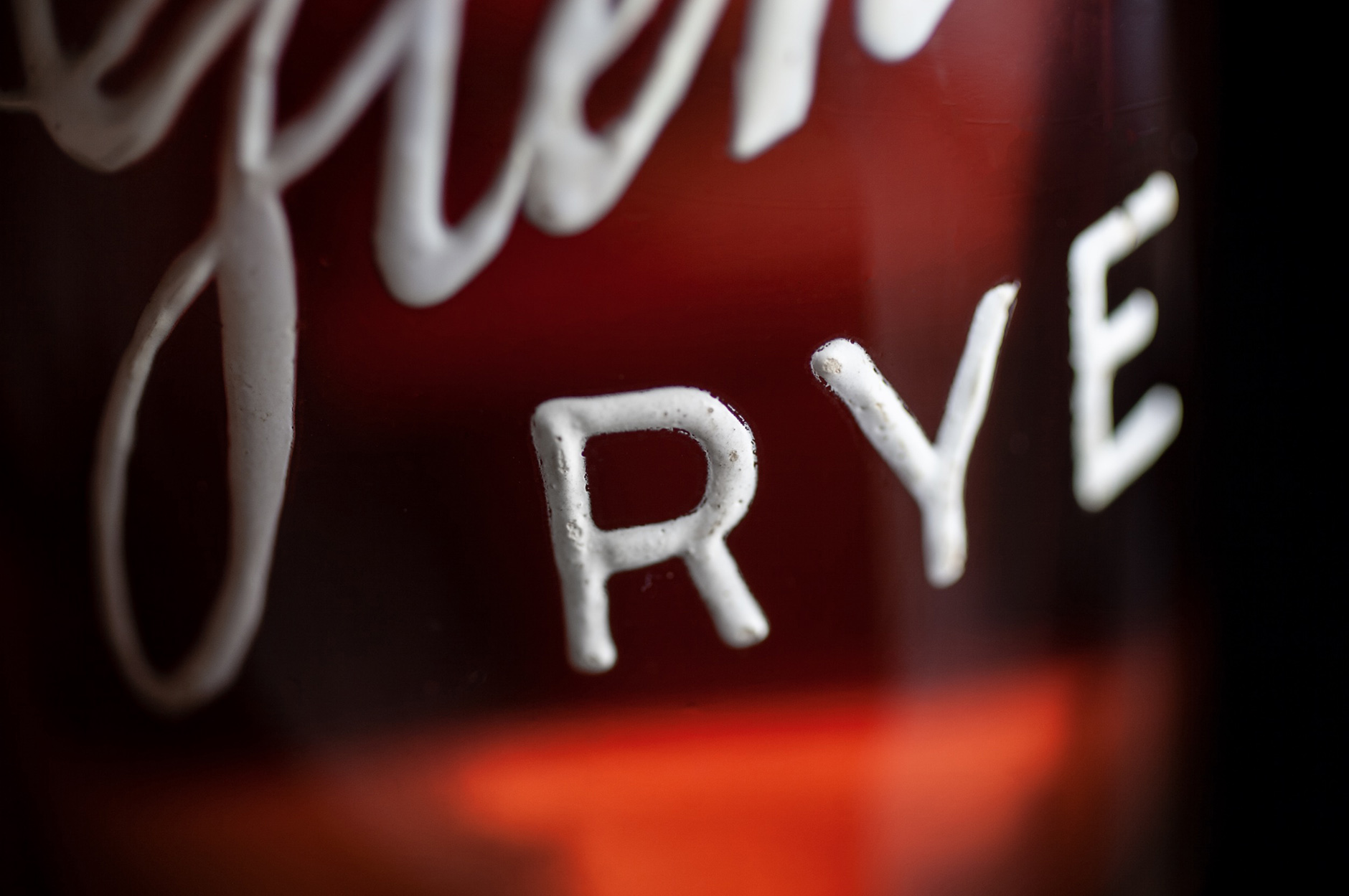 Aged whiskey was originally sold by the barrel (not by the bottle), to saloons, druggists and other distributors who would dispatch it to their customers one bottle or jug at a time, unlabeled, much like how customer’s own “growlers” are used to take home fresh beer today. At first it was a commodity with little in the way of branding or individuality of any kind. Over time, it was discovered that some suppliers provided better hooch than others, and thus was born the labeling and branding of barrels and eventually bottles with unique identifying names and trade marks. I believe Old Forester was the first American whiskey to be made available by the bottle, in 1870, while concurrently still for sale by the barrel. It was James E. Pepper which was first available only by the bottle, in 1890.

In the early days of this transformation – before individually-labeled bottles existed for retail sale – there were bar-service bottles which bore the name of their whiskey’s producer or distributor. These hand-made and hand-decorated glass bottles would have been too expensive to include for sale by-the-bottle and were only used for display and service on-site at a tavern, like a branded decanter. Once emptied, they were refilled from a barrel, on site. This practice took place from the mid 1800s up until the early 1900s. 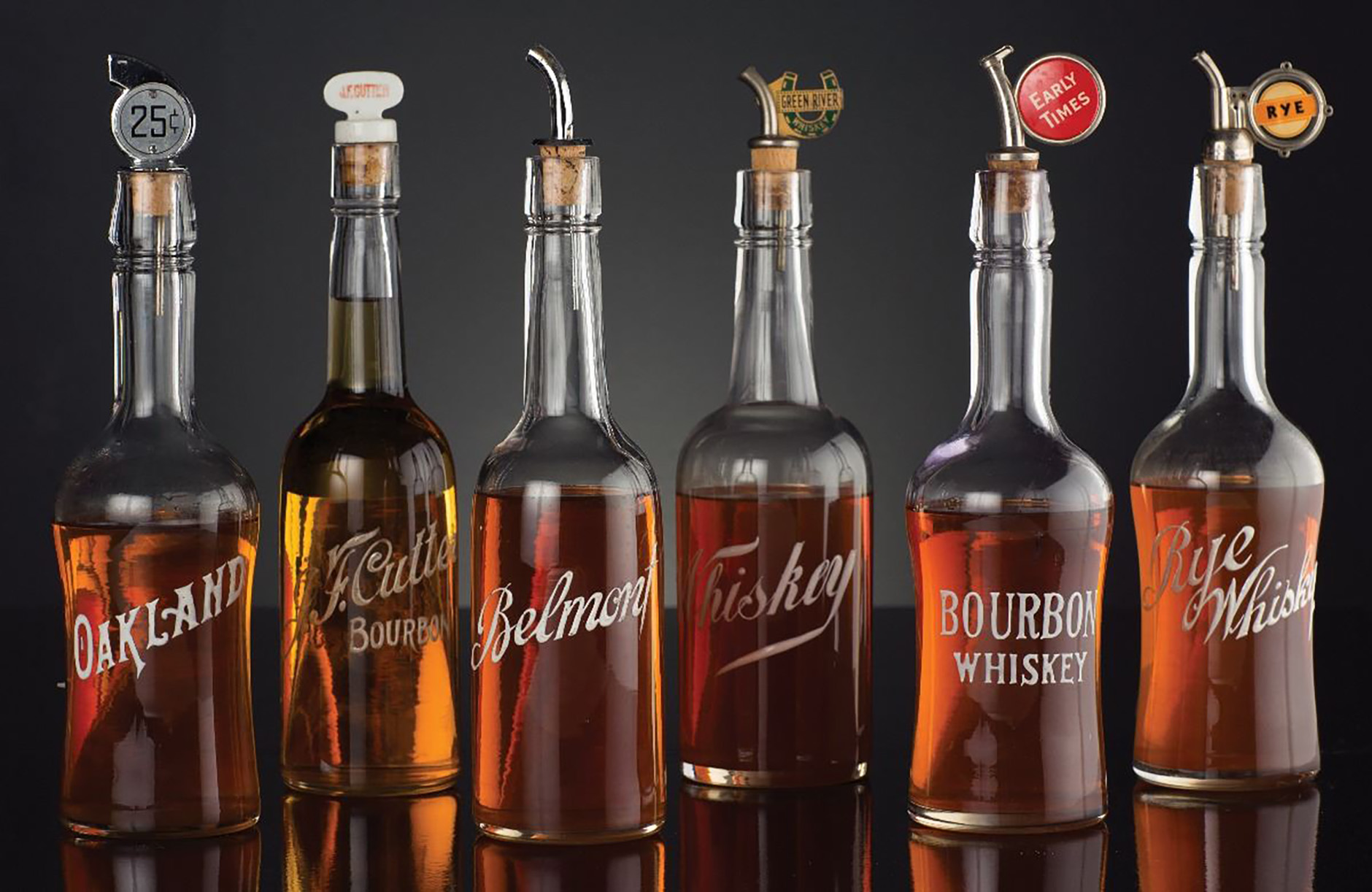 I’ve encountered these bottles for sale in antique stores, on eBay, in some of my client’s private collections (see Limestone Branch Distillery) and there are quite a few beautiful examples at the Oscar Getz Museum of Whiskey History, in Bardstown, Kentucky – both worth a visit, by the way. On these bottles, the brand name in usually rendered in stark white lettering across the front. The name is often executed in an ornate and attractive script style.

As a bottle & package designer, the process by which these bottles were produced has interested me greatly for some time – but information has been hard to come by. The lettering is solid, or nearly solid/opaque white, depending on the example. It’s very thick, raised up to nearly 1mm high above the bottle’s surface sometimes. It occupies a strange place in between what appears to be hand-made and what appears to be machine-made. The edges of the art are crisp, yet there’s a softness – like a pillow contour – to the lettering. It’s thicker in the middle and thinner at the edges, much like a deeply embossed paper label. And the surface is just slightly irregular – with a very subtle, liquid-like quality. As my three-year-old daughter said, it looks like frosting. Yes. Exactly that.

From my own collection:

I couldn’t figure out, just by looking at them, exactly how these graphics were applied to the glass. Certainly it appears to be much thicker than any screen printing I’ve ever seen. And it’s very durable – it’s not paint or ink. It cannot be scraped off. Also, the lettering appears to be white, through and through. That is, it’s not just the upper surface of the art that is “painted” white, but the whole of the artwork, down to the original surface of the underlying bottle, is a solid white, glass or glass-like material.

I’ve recently learned that this is enamel, sometimes called “pyroglaze” enamel. In short, this is a process which involves application of a ground glass & flux paste to the glass bottle, which is subsequently fired, at very high temperature, in a kiln. This melts enamel paste, turning it into molten glass, and then fuses it permanently to the bottle. The powder or paste itself is a combination of ground glass, ceramic, lead, borax, flux and/or other substances which affect the hardness, melting/fusing temperature, color, luster, etc. in different ways.

The origin of this process itself has parallel histories in ancient Egypt, China and the Islamic World (the last of which is also where distilling began, by the way).

Of most interest to me is how the graphics/powder/paste were applied to the glass. Was each bottle individually hand-painted with this enamel paste by a skilled artist? Were they printed in some way?

I’ve read some reprinted technical manuals from the late 1800s to no avail. I’ve inquired with bottle collectors, glass museums, whiskey museums, whiskey historians and distillers and nobody has more than educated speculation on this topic. With the combined wisdom of all these sources, I can say that most folks believe that a stencil or screen print was very likely used to at least apply the pattern of the artwork to the glass and then an artisan probably built up the thickness of the enamel with a brush, by hand. Given the evidence, this seems reasonable to me. I’ll certainly update this post if I learn more.

When I inquired with Mr. Veach, he related that when he’s seen multiple executions of the same brand, they did exhibit subtle variances from one bottle to another. This would suggest a more of hand-painted approach, or perhaps a hybrid technique, as described above. All parties seem to agree that these bottles were hand-decorated one way or another, in low quantities. 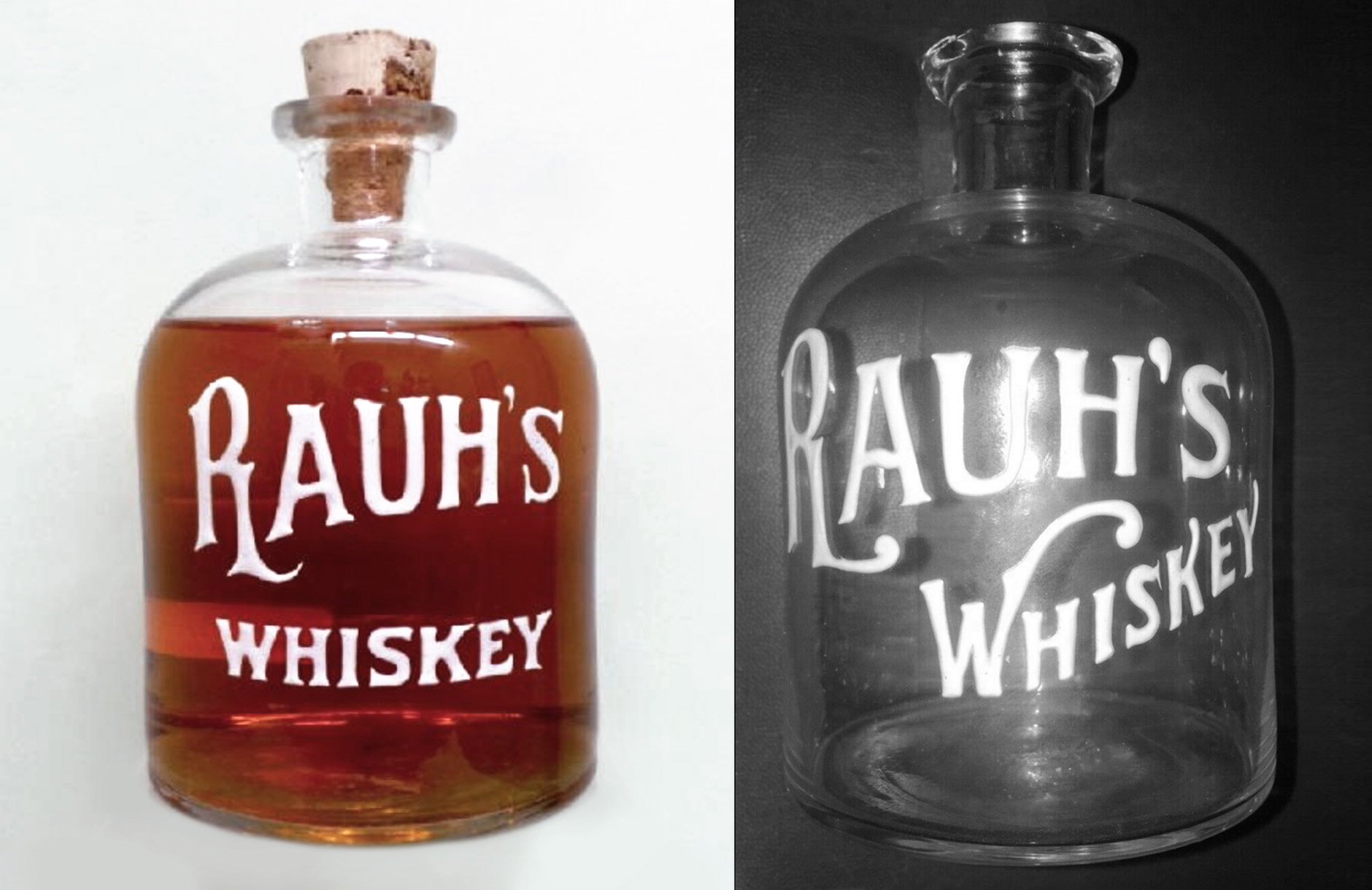 Today, the look can most affordably be approximated through screen printing, which is a reasonably affordable process – on par with the cost of a paper label. Screen printing, which is the application of ink through a stenciled mesh (screen), is easily automated and produces clean, crisp graphics in any color you can imagine. It’s the same process used to print tee-shirts, posters and many other items. The resulting graphics are durable and opaque, however they are very flat by comparison to enamel. Usually, in context of bottle production, the application of screen printing is called “deco,” short for “decoration.” Depending on the size of the artwork and the quantity and complexity of bottles, screen-printing can cost from 25 Cents to just over a Dollar, per bottle. Sazerac Rye is the one brand/bottle in production today which comes to mind, as the best example of how screen printing can be used to very much achieve the look – at least superficially – of the antique enamel bottles in question.

A screen printed design, from my own portfolio: 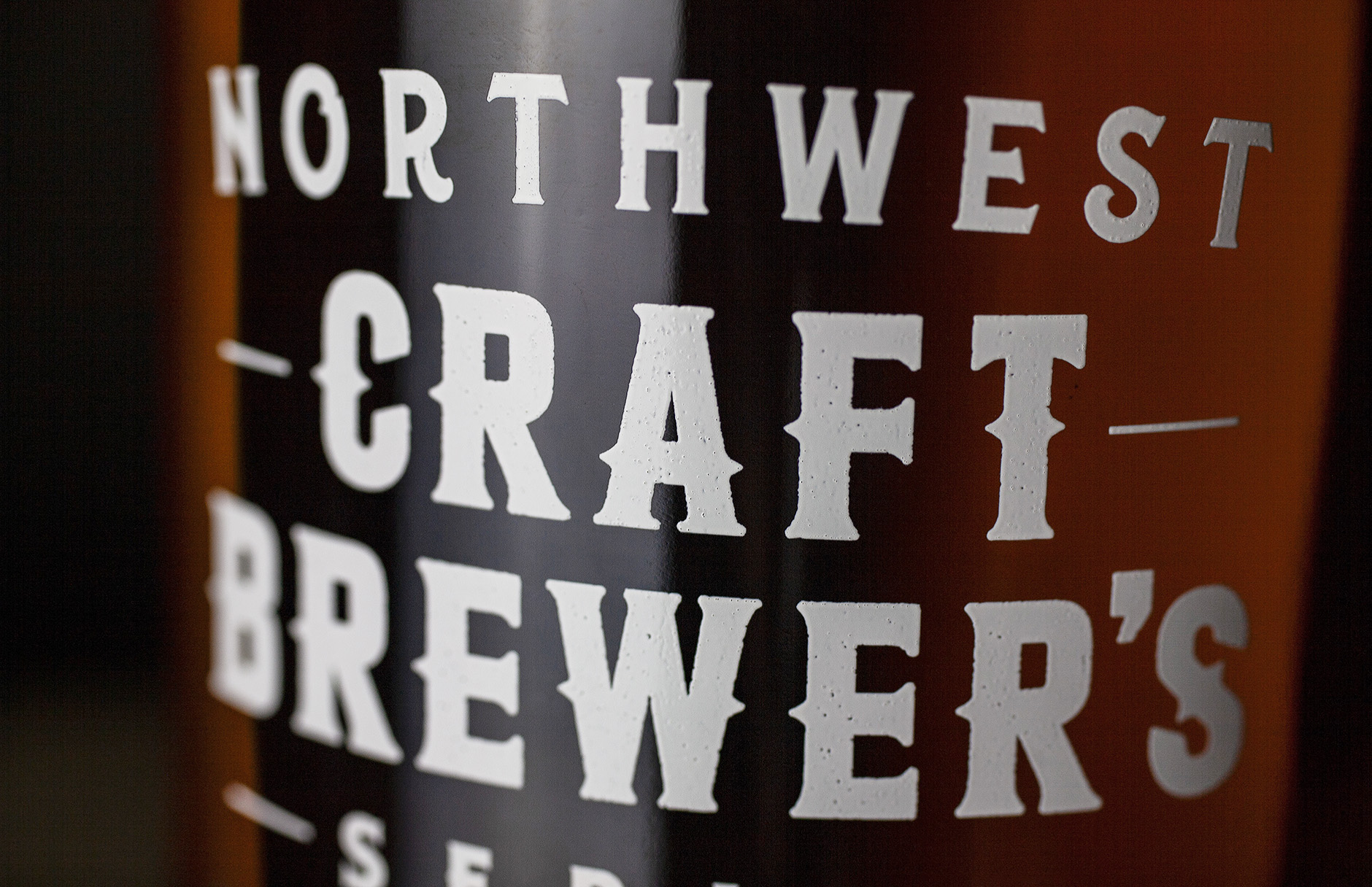 The best possible way to really simulate the enamel look (and feel), in current-day manufacturing, is to first emboss the glass and then apply screen-printed ink in exact registration to the embossing. Embossing is achieved with a “finishing” mold, which is part of the glass manufacturing process. Molds are costly and most producers won’t create custom finishing molds for an order of fewer than 20,000 units. That fact, alone, can be a barrier to many spirits producers. For those who can afford the upfront investment and who can inventory that much glass, it’s possible to create a wholly custom-molded/shape bottle, with (or without) embossed lettering and graphics.

A screen-printed & embossed example from my own portfolio: 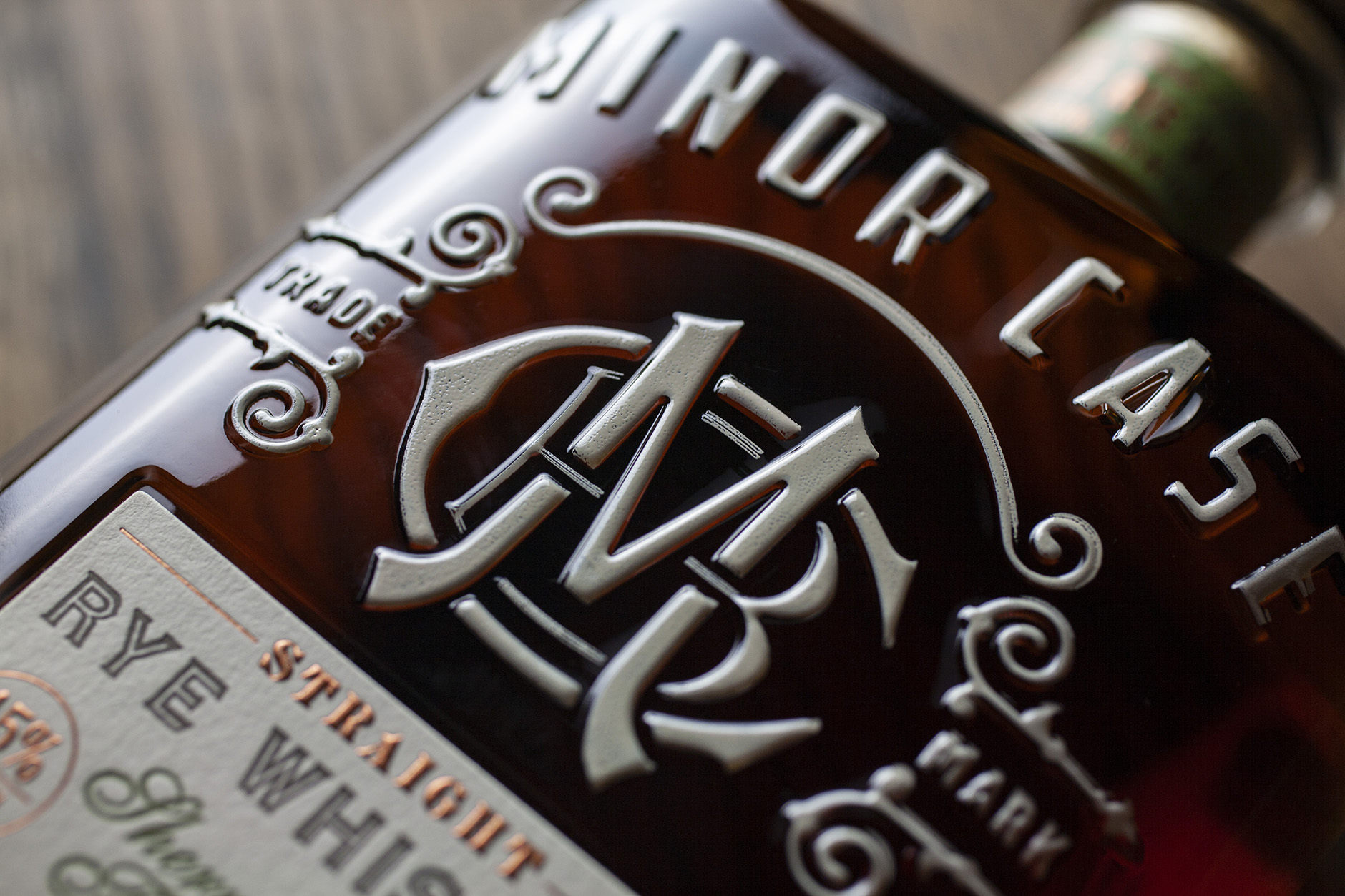 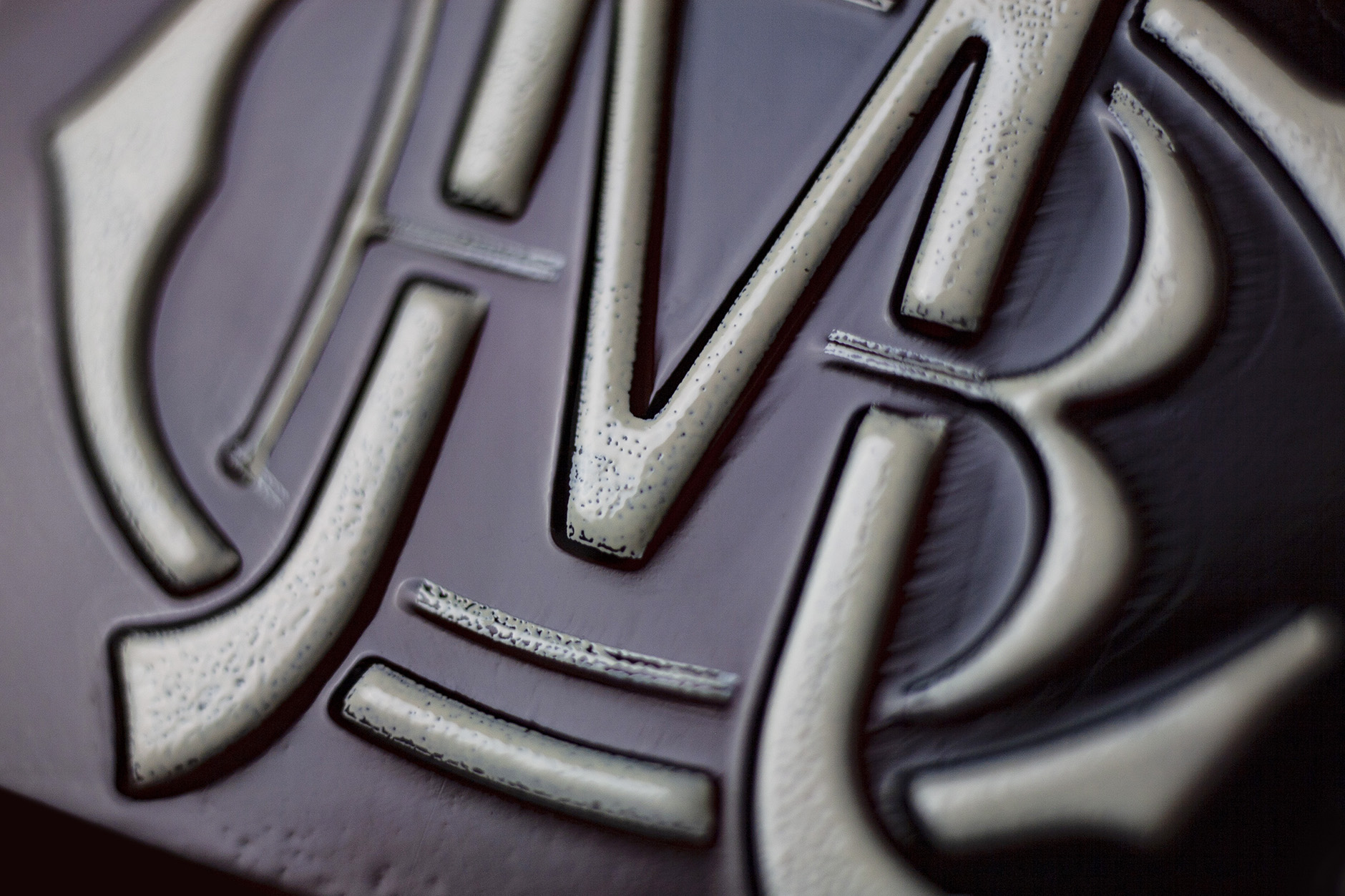 To achieve a convincing faux-enamel look, after creating a bottle with molded-in, embossed art, the next step would be to screen print (“deco”) the ink right on top of the embossed art. The final result of these two processes in combination is artwork which is deeply embossed in the glass, totally opaque, very durable and looks very much like the handmade enamel process of over a century ago. Beyond the visual appeal, of course, is a richer tactile experience. Bottles decorated in this manner involve the shopper/drinker’s sense of touch, invite deeper engagement, and return greater rewards to those who pick it up, on an experiential level.

Surveying the current landscape of spirits packaging, I’d say that this is currently a very rare approach either due to prohibitive cost, lack of motivation to do so or a combination of the two. After years of active observation. I’ve encountered fewer than five examples, at most. Recently, I had the pleasure of applying this effect to the Limestone Branch Distilling’s Minor Case Rye. I’d be remiss if I didn’t also mention how tasty this rye is. 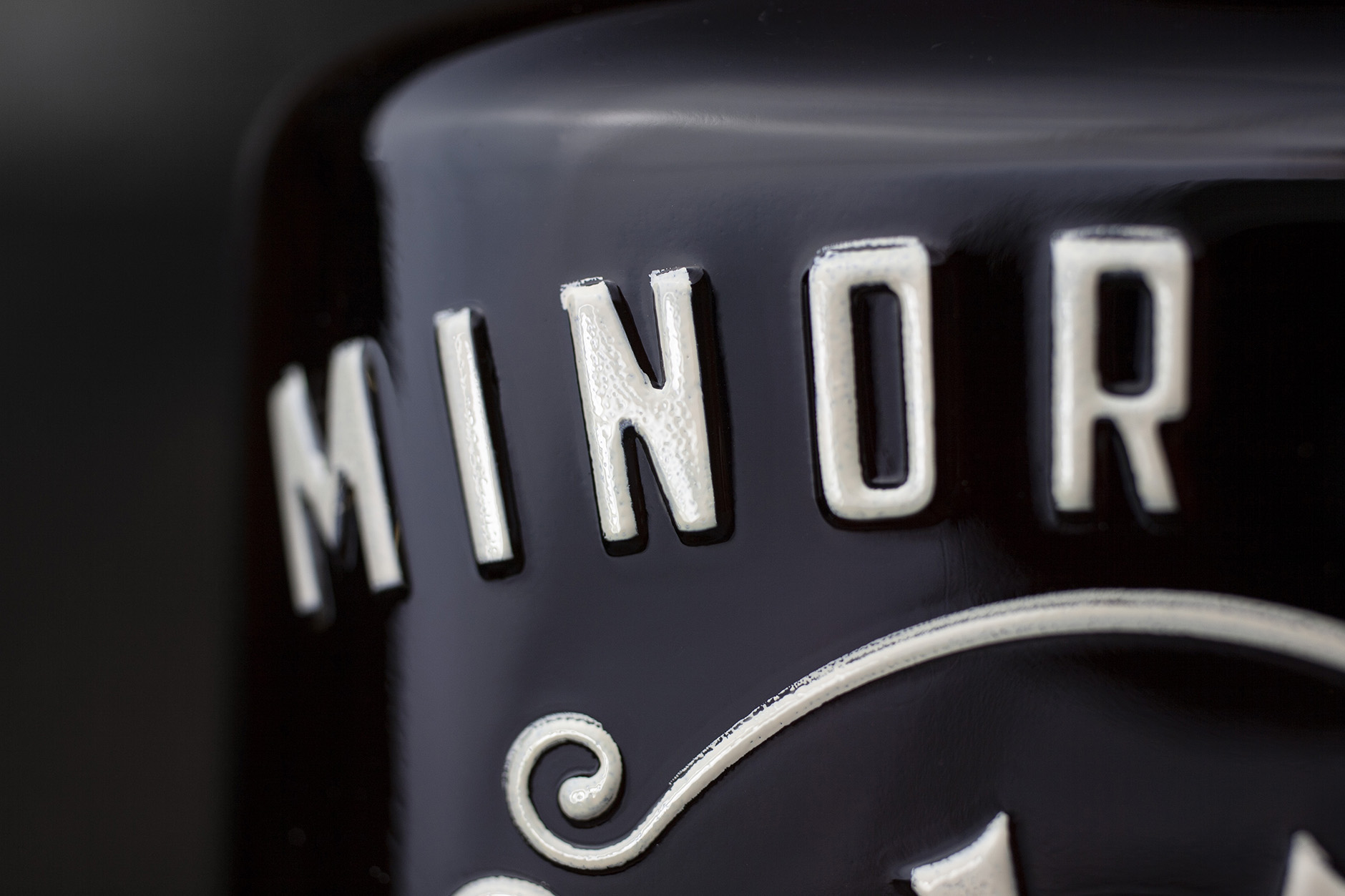